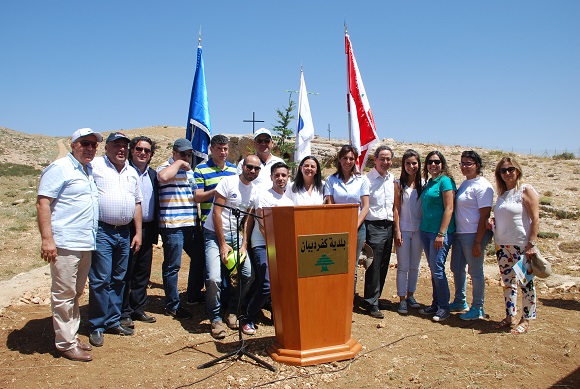 Saint Joseph University’s (USJ) Faculty of Science, ECOPLANTMED project partner in Lebanon, together with Jouzour Loubnan Association, held a dissemination event on Saturday July 25th to shed light on the progress made in the Kfardebian region, in terms of reforestation and biodiversity conservation, in cooperation with the Kfardebian Municipality.
The Sahl Al-Midan place welcomed invitees and participants, locals, stakeholders, NGOs, university representatives, journalists and specialists, among whom were Dr. Samer Bteich, Kfardebian Municipality representative, Raoul Nehme, Head of Jouzour Loubnan Association, and Dr. Magda Bou Dagher Kharrat, Head of the Life and Earth Science Department at the USJ’s Faculty of Science.
In a word delivered at the occasion, Bteich welcomed all participants and said that the Kfardebian region has always been committed to supporting environmental projects that are also at the service of the town’s development. He also thanked the European Union, the ECOPLANTMED project and Saint Joseph University for the plantation initiative in the region. Bteich added that similar projects were a form of resistance to desertification.
As for Nehme, he highlighted the importance of the EU’s continuous support to reforestation projects in Lebanon with Jouzour Loubnan. He also reminded of the need to deepen scientific studies to lower the costs of similar projects on a wider level.
Also, Kharrat spoke of the parameters of success and failure of any plantation, referring for instance to the exposure and richness of the soil, and the presence of nurse plants. However, she noted that these theories have not been statistically validated. She also shed  light on the ECOPLANTMED project, stating that it is a joint Mediterranean initiative based on the collaboration among seed banks, research institutes and institutions dealing with native plant conservation and management, financed (90%) by the European Union ENPI CBC Mediterranean Sea Basin Program. She presented the project partners, goals and activities, emphasising the actions related to the ecological restoration pilot sites, which allow the evaluation of the optimal parameters in order to achieve desired goals at a lesser cost. Posters were also printed and presented to the public in order to explain the scientific methodology of the plantation adopted on the pilot site in the region.
Finally, a cedar, Cedrus libani, was planted on the site to show the participants a part of the experimental desogn of the restoration implemented by ECOPLANTMED in Kfardebian. 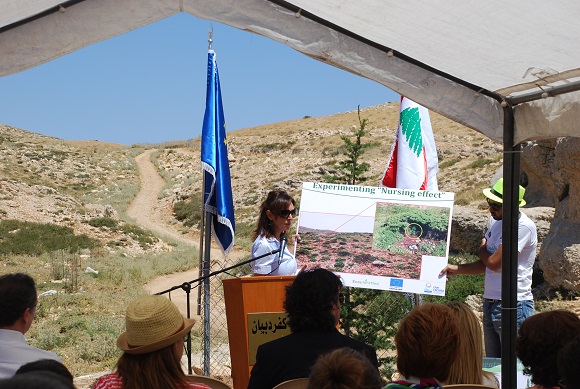 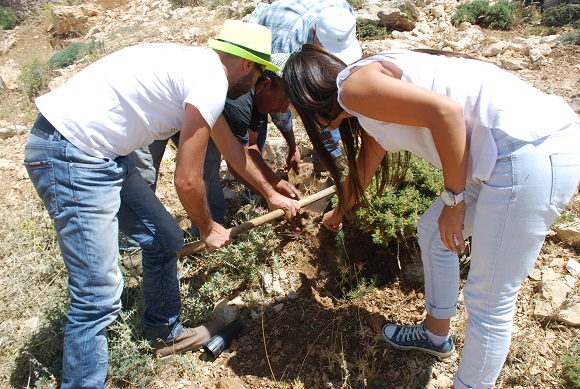